Need a companion for your digital journey?

Let’s catch up over a coffee.

, we are very excited to talk to you!

A 12Grids’ Success Specialist will soon get in touch with you and help you move forward. 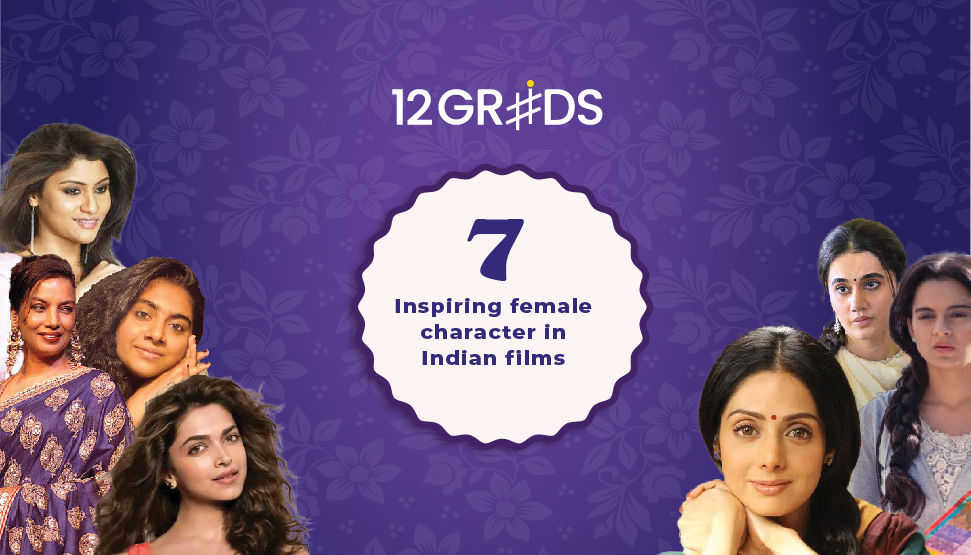 Female characters have been a point of discussion in Indian films for a long time now. From being treated as an “object” to portraying strong characters that challenge the notion of society, Indian films have seen it all.

→ Shabana Azmi in Arth: Arth came when Bollywood was churning out massy action-oriented films at large. The film, loosely based on writer-director Mahesh Bhatt’s life, talks about layered and complex relationships. The semi-autobiographical film features Kulbhushan Kharbanda, Smita Patil and Shabana Azmi in lead roles. While Kulbhushan Kharbanda and Smita Patil were excellent, it is Shabana Azmi’s author-backed role that wins the most praises. Pooja's character is a perfect example of how a woman, despite her hardships and struggles, can live an independent life.

→ Deepika Padukone in Tamasha: Tamasha is one of those films that gained its following five years after its release. Such has been the impact that there are forums dedicated to the multiple theories regarding the film. Deepika Padukone's character, i.e. Tara from Tamasha, is considered one of the finest roles played by her to date. Her character taught us many things. From fighting it out to caring and having an understanding nature towards your love, Tara is a great character to look up to.

→ Nimisha Sajayan in The Great Indian Kitchen: The Great Indian Kitchen is one of those movies with a very limited release but manages to win the audience’s heart. When the world was grappling with lockdown came a movie featuring a cast of actors and technicians who no one knew back then. It is a movie for women who live their lives in the kitchen. The film centers around Nimisha Sajayan’s character “The Wife”, who gets married to a school teacher from a renowned family.

As the new bride becomes a wife, her life becomes a routine that is taken for granted. However, Nimisha’s character, who has a totally different upbringing from the house she has been married to that still believes in archaic customs related to menstruation, finds it difficult to survive. How she manages to come to terms with the system built by the society forms the movie. Watch out for the climactic act. It is an inspiring & motivating moment.

→ Konkana Sen Sharma in Wake Up Sid: Ranbir Kapoor starrer Wake Up Sid is one of the best coming-of-age films from Bollywood. The movie instantly struck a chord with the audience and continues to stay alive in the hearts of generations of all ages. Written and directed by Ayan Mukherji, the film is headlined by Ranbir Kapoor, a rich, spoiled brat who lives off his father’s money and Konkana Sen Sharma, an aspiring writer who moves to Mumbai from Kolkata. The character of Konkana named Ayesha teaches us many things that we should implement in our daily lives. From getting out of one’s comfort zone to being fearless and making your dreams come true, the film is an excellent watch for Gen Z.

→ Sridevi in English Vinglish: Gauri Shinde’s heartwarming debut film “English Vinglish” saw the late Sridevi play a homemaker, Shashi Godbole, who faces patriarchal atrocities often seen in Indian families. The film saw Shashi, a naive and innocent female travelling to the UK to attend a relative’s wedding. While in the UK, she is made fun of for not knowing how to speak English. Gauri Shinde’s simple story is impressive as the woman overcomes her shortcomings.

→ Taapsee Pannu in Thappad: The combination of director Anubhav Sinha and actor Taapse Pannu had just delivered the hard-hitting social commentary “Mulk”, came the news of their collaboration for another intense drama. Taapsee Pannu plays Amrita in the film ‘Thappad’, an educated, upper-middle-class woman forced to take stock of her relationship after being slapped by her husband, played by Pavail Gulati. While the people around Amrita, consider the issue trivial asking her to forgive her husband, she, however, decides to fight back.

The film teaches everyone to RESPECT YOURSELF & BE HAPPY. The thing that we need to know and be taught. Respect ourselves and learn to be happy in whatever choices we make. It is okay if a girl doesn't like cooking or managing the home. It is equally acceptable if a man doesn't want a settled corporate career and pursue something else. It’s OK to have imperfections. That’s what makes us different from the rest.

→ Kangana Ranaut in Queen: Vikas Bahl’s rom-com “Queen” marked the golden start for Kangana Ranaut. The film follows the story of Rani Mehra, a diffident Punjabi girl from New Delhi who embarks on her honeymoon to Paris and Amsterdam by herself after her fiancé calls off their wedding. The film teaches that marriage is not the be-all and end-all for women. The film is a must-watch for all women. One that will leave a smile on your face and heart humming happily.

These are just the seven female roles that I feel are special and need to be appreciated. Although, this list can go on and on. Do you think any other actor deserved mention? Drop your thoughts in the comments section.

The Ultimate Guide to Google My Business

Email Phishing: Everything You Need To Know About